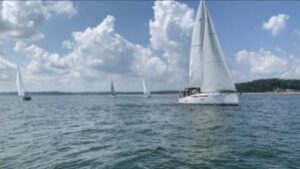 Sailors from the Huntington area united with our MCYC racing fleet for The Masthead Race on Sunday August 9. Eleven assorted boats came to the starting line at this fundraiser for the benefit of research at the Cold Spring Harbor Labs.

A beautiful, puffy-cloud morning with a gentle NW breeze gave us hope for an easy day racing around the Bay. After a clean start, the boats made their way smartly from Bell 8 to the first mark at Nun 6. Half-way to the next mark at Eaton’s Neck, the breeze faded and the racers stalled. An occasional puff would drive the boats along the course, but only for a tease before fading again. Eventually, after more than three hours of drifting and wake-bouncing, the time limit expired. Only 4 boats completed the Race. Mother Nature doesn’t always cooperate, but MCYC is grateful for the participation, and the good spirits shown by all.

Congratulations to Brian Coon (Ketwomoke YC) and the crew of Orion for their come-from-behind win over Dan Corcoran’s Strider (Lloyd Harbor YC). Masthead Cove’s own Rich Correll and Loki 4 took Third Place, and Jack Posner aboard Elán took a respectable Fourth Place. Thanks to all! 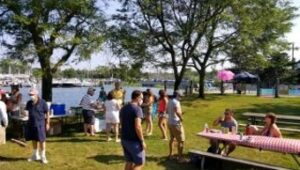 The Race Party was held at West Shore Marina.
Donations for auctions and raffles submitted by:

Special thanks to West Shore Marina for letting MCYC use their BBQ area and to everyone who supported this event online!